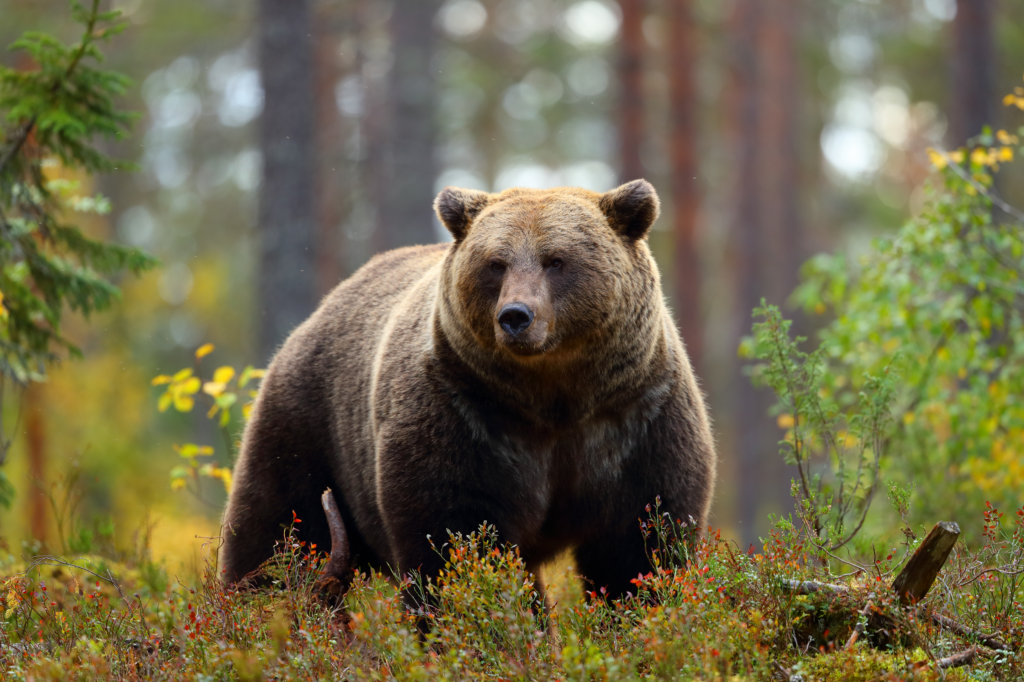 It’s official. Another bear market has begun. On June 13, the S&P 500 Stock Index moved into bear territory, defined as a 20% down move from the prior high, which in this case occurred in November of 2021. A big change in less than seven months.

As advisors, the most important work we do for clients is in the turbulent periods leading up to market inflection points. During late stages of bull markets, our job is to help clients avoid getting pulled by greed into hype about breakthrough innovations, life-changing profits, and apparently easy money. Late-stage speculative dangers can come in the form of great companies trading at absurd overvaluations (Cisco in 1999, the FAANGs in the last several years), or as potentially worthless assets flying high on credulity and fear of missing out. (Compare Pets.com’s ads from the Super Bowl in 2000 with similarly ill-timed ads for cryptocurrencies during 2022’s big game.)

We call this the blow-off phase.

All bull markets eventually come to an end. The longer the bull phase and the more exciting and profitable the blow-off, the more punishing the following bear market tends to be. Similarly, the bull market’s hottest winners are often the most costly losers when that bull market, without fair warning, suddenly and painfully transitions into a bear market.

The costs of abandoning price discipline and chasing past performance have been on display in recent months. The broad market is down 20% from the prior high, but that doesn’t capture the true damage of this bear market for investors in more speculative assets. Consider the following investments. Note the date of the high for each, the return for the year before the high, and the loss since.

Looking at the chart above, we’ve long been underweight the top four assets, and overweight the bottom two. Our diversified and value-tilted strategy has substantially reduced our clients’ downside exposure to the bear market. So far in 2022, we’ve accomplished the first half of our job—to preserve capital by avoiding the seductive minefields of easy-money speculations at the end of a bull market.

The other half of our job, and the function that we believe we’re best at compared to most of our peer firms, is taking advantage of opportunities created during bear market declines, by buying quality assets on sale. We think we do that exceptionally well. This is not a function of knowing where the bottom is. We have no idea where the bottom will be.

“All happy families are alike, but every unhappy family is unhappy in its own way.”

Like unhappy families, each bear market brings its unique set of miseries:

The bear market of 2000-2002 was largely confined to tech stocks. The unloved assets with which we’d loaded up our portfolios—small-cap value stocks, real estate investment trusts, and closed-end bond funds trading at big discounts—actually went up even as the S&P 500 went down 45% and the NASDAQ declined almost 90%.

The financial crisis of 2008-2009 was more of an equal-opportunity portfolio disaster. Nothing much was spared, including the highest quality assets. Even inflation-indexed Treasury bonds (TIPS), usually considered among the very safest of assets, declined 14% from one month to the next during the brutal fall of 2008. Unlike our strong relative performance during the tech crash, during the financial crisis our portfolios went down right along with the broad markets.

The 2020 COVID bear market was a flash in the pan. Blink and you missed it. When markets broke sharply in mid-March on news of the spreading global pandemic, it looked like the world economy was in for its worst contraction in decades, and we suspected we’d see a bear market of historic proportions. The economic decline was large, but both the economy and financial markets were buoyed by an unprecedented injection of cash from governments and central banks. Within days, the bear trend reversed, and within months the markets were making new highs.

For investors with a long-term view, every bear market challenges us to answer two questions: what should we buy and when? 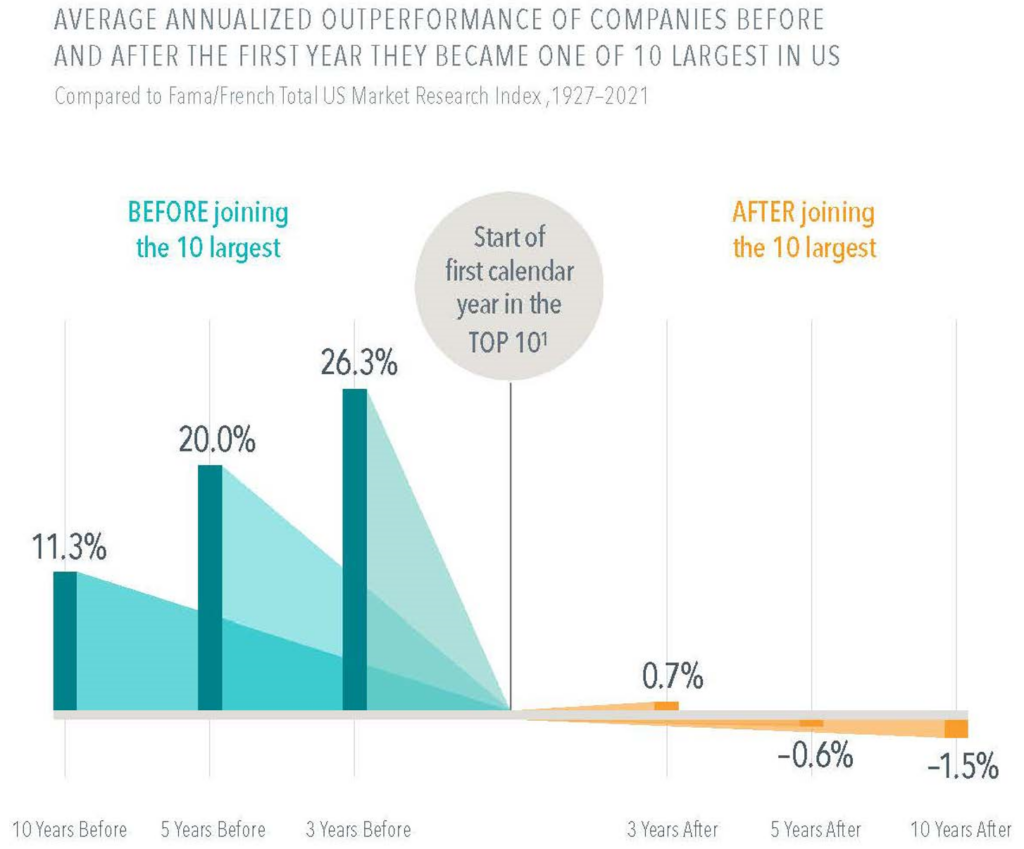 Once a stock joins the very select club of the ten most valuable companies, it tends to do slightly better than the market for the next three years, but to underperform over the next five and ten years.

How bad could the future underperformance of the recent bull market’s leading stocks get?

Consider the top stock during our last big technology bubble, in the late 1990s. That stock was Cisco, which went up 300 times from when it went public in 1990 until its high in December of 1999, when it was worth over half a trillion dollars.

Fun times! Except not so fun when markets came back to earth. Within two years, Cisco lost 77% of its value, and it still hasn’t recovered its prior high more than 23 years later, despite sales being up 178% and earnings 645%!

Still thinking you may want to chase a potential future recovery in Tesla?

In recent years, the poster child for technology triumphalism and indifference to risk has been Cathie Wood of the ARK Innovation Fund. After a phenomenal 2020, her exchange-traded fund peaked in February of 2021. At that time, she predicted 15% future returns. Since then the fund is down almost 75%. In mid-December, she called tech stocks “deep-value stocks.” Down another 59% since then. Wood’s rise and fall is simply the latest iteration of an endlessly-repeated reality of investing. Every big bull market ends in wretched excess. Someone has to be the Pied Piper of late-cycle speculation, and the poor rubes who follow her may end up with losses that take generations to recover.[1]

Forgive us if we’re not convinced that the FAANG stocks and other growth darlings are fully out of the woods. Despite being down 46% at the recent low on June 16, the FAANGs were still trading roughly where they were in May of 2020.

If not Big Tech, what should we buy amid the current market turmoil?

When we buy in a disordered market, we want to be confident we’re putting our serious money into assets with understandable and durable cash flows. Expect us to buy broadly diversified assets that appear to be relatively cheapest within the market—the same kind of quality assets, identified by the same methodology, that we owned going into the bear market.

So that answers the first question, what we’ll buy. The second question is more difficult—how do we know where the bottom is?

~from Monty Python and the Holy Grail

Comparing how we bought in the extended 2008-2009 bear market to the much briefer COVID market break of 2020 may be instructive.

2008-2009: We reduced our overweight cash position in summer of 2008, months before the major market break. We were early. We began to move from bonds to stocks in September of 2008, and continued until March of 2009.

Here’s what that process looked like to clients: We bought. What we bought went down. We bought again. And watched it go down again. And again. For some clients, we bought the same asset as many as four times, before we’d moved all possible dollars from bonds to stocks and from cash to stocks, and had no more funds to invest.

Naturally, there were clients who weren’t happy with us. One said, “You bought this same fund three times before, and it went down every time. Now you’ve bought it again. What’s wrong with you? Aren’t you paying attention to current events?”

After a final crisis of fear in early March of 2009, the market turned, and we began the longest uninterrupted bull market in US history. At the turn, we had a larger proportion of our portfolios in stocks than we’d had at the prior market peak in 2007.

Our behavior during the financial crisis is one of the two actions I’m proudest of in a career that stretches back to 1978.

March 2020: The COVID market break in early 2020 was very different. When prices went down, we bought. We anticipated the possibility of a repeat of the financial crisis, when we bought multiple times into an ever-declining market.

Didn’t happen. We began to buy, put dollars to work for only some of our clients, and then the market came roaring back.

The sad fact is we don’t ever know where the bottom is, any more than we knew exactly where the top was last year. The only way to buy anywhere near the bottom is to start buying and keep buying. Eventually, you’ll see the market bottom out and go back up.

Expect us to be too early, perhaps to buy too soon, and to persist.

I’ve experienced five bull markets and six bear markets in my career. Since roughly 1980, I’ve followed a consistent strategy that has helped generations of clients build and maintain durable wealth:

Those principles are simple. Following them can be difficult, especially at market extremes. That’s why they are deeply embedded into the processes our entire team uses to manage client portfolios.

[1] Few such gurus have careers that stretch into the next cycle peak. For example, George Gilder, one-time publisher of the Gilder Technology Report and author of Telecosm, cheerleader for the tech bubble of the late 90s, has since moved on to found the Discovery Institute, which is ground zero for the intelligent design movement. (Don’t ask.)